Lights, Camera, Action! Gerald R. Ford International Airport Serves as Location for Filming of “The End of the Tour.” 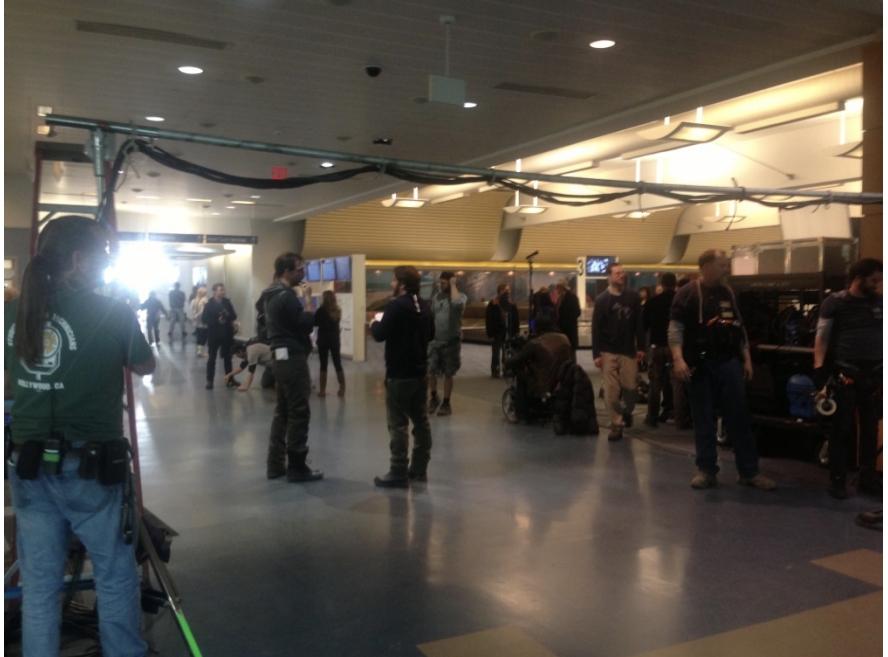 Grand Rapids, MI. – The Gerald R. Ford International Airport had hundreds of extra visitors last week as the James Ponsoldt movie, “The End of the Tour,” was filmed on location. Due to security and contract regulations, the announcement was reserved until after filming commenced.

A crew of over 100 people worked for over fourteen hours at GFIA, and filmed in various locations throughout the airport. Locations included the economy parking lot, the parking ramp, the airfield, the Concourse B hallway as well as two vacant ticket counter areas. Grand Rapids was standing in as both the Minneapolis-St. Paul and Chicago O’Hare airports with two different scenes created among the location.

The Gerald R. Ford International Airport staff and security worked with the cast and crew for several weeks leading up to the filming to scout out locations, times for filming and acclimate “The End of the Tour” crew with strict security rules and regulations.

“We are excited to be featured in this film,” said GFIA Executive Director Brian Ryks. “We fully support the film industry and love to see the industry grow right here in West Michigan. It is a unique experience working with the cast and crew to transform our airport for their scenes.”

Actors Jesse Eisenberg, Jason Segel and Joan Cusack were at the airport for filming. “The End of the Tour,” is a biographical drama film based on David Lipsky’s 2010 book, Although of Course You End Up Becoming Yourself. Eisenberg is playing Lipsky while Segel was cast as David Foster Wallace, an American novelist.

“It was a really smooth shoot at GRR. Realizing that the airport’s first priority is its passengers and their safety and convenience, we wanted to show the airport we were willing to accommodate and alleviate their concerns,” said “The End of the Tour” Location Manager John Johnston. “Once we met on that level, the airport administration welcomed us and made our work day flow smoothly. They were behind us 100% and the airport staff supported every move we had at the airport. We couldn’t have been in better hands. We really appreciate the hospitality and true enthusiasm of everyone at GRR. I look forward to coming back in the future.”

The actors and crew have also been utilizing the Gerald R. Ford International Airport for its main intention – travel. Location manager John Johnston as well as Director James Ponsoldt and other crew members have been in and out of Grand Rapids for several months leading up to filming to prepare and scout the city.

“Not only are we happy to host the cast and crew for filming, but we are happy they are flying in and out of our airport and bringing in money to support the local economy,” said Ryks. “They are flying in and out of Grand Rapids, grabbing a cup of Starbucks at our airport, staying in our hotels and eating in our restaurants. It’s wonderful for the entire West Michigan community.”