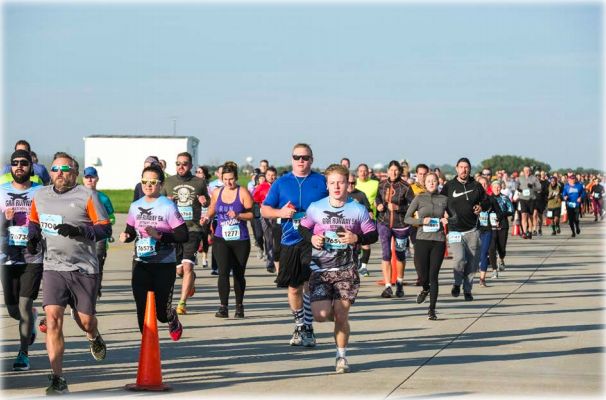 Grand Rapids, Mich. – Over 1,200 runners and walkers laced up their sneakers for a behind-the-scenes 5K on one of the runways at the Gerald R. Ford International Airport (GFIA).

The third annual GRR Runway 5K took place on airport grounds today under sunny but cool conditions. The race began near the southwest side of the Airport’s general aviation runway looping by a handful of hangars and aircraft static displays, and wrapping around on Runway 8L/26R – GFIA’s general aviation runway. Spectrum Health helicopter AeroMed also provided an aerial flyover for participants and spectators to enjoy.

“For the competitive runners it was a nice, smooth course under a different kind of scene, and for walkers and families this was an opportunity for those who wanted to experience an enjoyable event on one of our runways that is normally only used for aircraft,” said GFIA president & CEO Tory Richardson. “It was a beautiful day for a race, and we were happy to host. It not only gave us a chance to show off our facility but support a wonderful charity at the same time.”

GFIA, in partnership with Trivium Racing, selected The Family Hope Foundation as its charity of choice to donate the race proceeds. The non-profit provides resources, activities, support, and funding to families of children with special needs in West Michigan. Final donation totals will be available later this month.

“Family Hope Foundation greatly appreciates being selected as the non-profit charity partner for the GRR Runway 5K race,” Sarah Vander Baan, scholarship chair for the Family Hope Foundation. “The generous donation received will allow us to continue to fund our scholarship program for those with disabilities in the West Michigan community. Many thanks to Trivium Racing and the Gerald R. Ford International Airport for their support and efforts.”