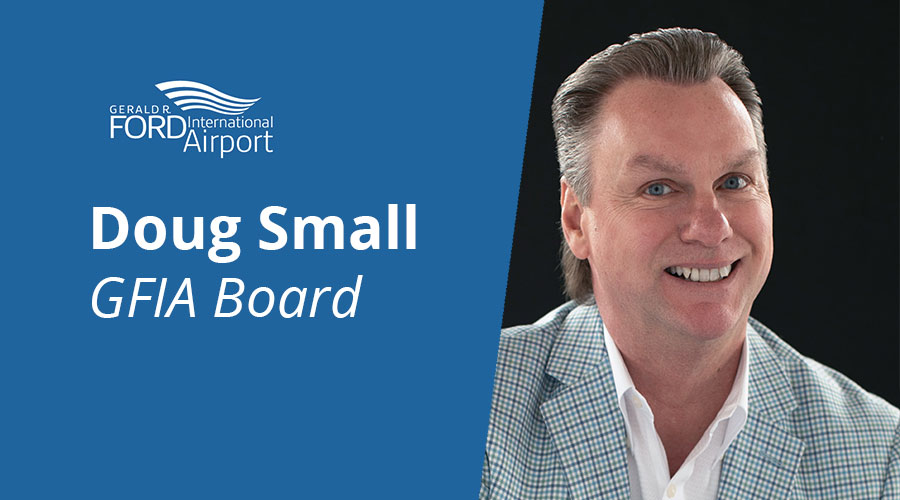 
Small was selected from a large pool of qualified candidates and replaces citizen representative Steve Heacock who left the board in December 2019 after serving two three-year terms.

“Doug is a tremendous addition to our team,” said Dan Koorndyk, Chairman of the Gerald R. Ford International Airport Board. “His day job with Experience Grand Rapids already serves in a capacity that is familiar with airport operations, projects, and hospitality in our community. We believe he will be even more of a champion and advisor for GRR in his role on our board, and we look forward to hearing his ideas and utilizing his expertise.”

“I am thrilled to join the Gerald R. Ford International Airport Board, especially at such an exciting time when the Airport is underway with several construction projects, new initiatives, and route additions,” said Small. “Our community is thriving, and our Airport plays an important role in its growth and success. I am eager to get started and contribute to this group.”

Small, an Ohio native, is the President & Chief Executive Officer for Experience Grand Rapids, the Convention & Visitors Bureau. Small began his tenure with the organization in September 2008 and has over 37 years of hospitality, tourism and destination marketing experience. Since Small’s arrival to Grand Rapids in 2008, hotel performance has seen record level attainments in room revenue and occupancy for nine consecutive years. Hotel room revenue has grown from $96 million in 2008 to $226 million in 2019. Prior to his current role in Grand Rapids, Small served as Senior Vice President for Visit Denver, and had stops as President of the Syracuse (NY) Convention Bureau, and in senior leadership sales and marketing capacities for destination marketing organizations in Palm Springs (CA), and Dayton (OH).

Other board appointments today included the re-election of Dan Koordyk as Board Chair, Floyd Wilson, Jr. as Vice Chair, and Commissioner Ted Vonk as Secretary.