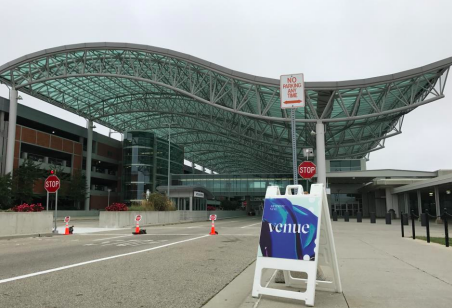 Grand Rapids, Mich. – For the first time in its history, the Gerald R. Ford International Airport (GFIA) is a venue for ArtPrize. The annual art competition, which begins on September 20, will feature seven artists displaying their work in the Airport – including the upstairs observation deck, east end of the terminal building, and outdoors under the trademark GFIA canopy & welcome wall.

GFIA has been a sponsor and welcoming point for artists and visitors for several years, and decided to sign on as a venue for the 9th annual art competition, given the connection to the community and the access point for both inbound and outbound travelers.

“We are thrilled to be a part of ArtPrize in more ways than one, and serving as a venue will not only give visitors a first impression of our city; but it will hopefully bring in those from around West Michigan into the airport to see the art and check out our newest facilities,” said GFIA President & CEO Jim Gill. “The Ford Airport strives to be reflective of the people and events in West Michigan, and what better opportunity is there to do so other than partner with ArtPrize? We look forward to welcoming in both local and international artists, and look forward to seeing their talents on display.”

"In addition to their stunning renovations, we are excited to expand the ArtPrize boundaries to include The Gerald R. Ford International Airport allowing visitors from all over the world to experience -- and vote for -- the work of ArtPrize Artists on their first and last stop in West Michigan,” said Christian Gaines, Executive Director of ArtPrize.

Featured artists in the Airport include:

ArtPrize runs from September 20 through October 8, 2017. For more information on the event, including how to vote; visit www.artprize.org