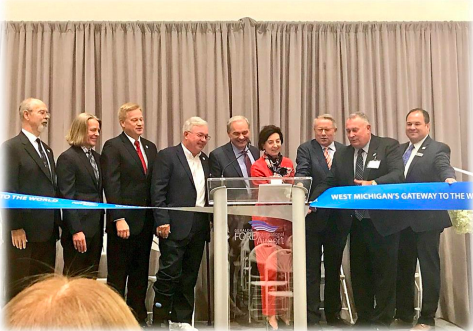 Grand Rapids, MI – Construction on the first phase of the Gerald R. Ford International Airport’s (GFIA) Gateway Transformation Project started in December 2015, and concluded today with a ribbon-cutting celebration with sponsors, tenants, airport staff, and dignitaries. The event recognized project sponsors and tenant partners for their support of the project, believed to be the largest of its kind of any airport in the country.

“The key to this entire project is partnerships, we really could not have done this without the support of our airline partners, TSA, tenants, concessionaires, staff, and our tremendous sponsors,” said GFIA President & CEO Jim Gill. “How many airports in the country can say they asked their community to support a project like this, and that community came through? We have an exceptional, philanthropic spirit here in West Michigan, and that is now showcased through our gateway to the world.”

The first phase of the Gateway Transformation Project included a consolidated passenger security checkpoint which centralized and combined security screening to one main checkpoint in the airport, eliminating separate screening for passengers traveling through either Concourse A or B.

“For four straight years we have seen record passenger growth, and we are on pace to make it a fifth. We saw a need to make improvements for the passengers, and to continue to deliver top-notch customer service and amenities,” said GFIA Board Chairman Roger Morgan. “We are committed to being West Michigan’s gateway to the world. We want people to step off the plane and know they’re in West Michigan.”

New retail space includes “A Touch of Grand Rapids” store, a partnership with Hudson News, and new food and beverage space include a Starbucks post-security, and Prospect Hill Brewhouse, a collaboration with HMSHost.

“HMSHost is thrilled to be a part of Gerald R. Ford International Airport’s Gateway Transformation Project. With the recent openings of Prospect Hill and Starbucks, HMSHost has brought both local and national favorites to Grand Rapids travelers,” said HMSHost Vice President of Business Development Bryan Loden. “We’re honored to continue our partnership with the airport, and our partner Steve Jenkins of Diversified Installations, to elevate the traveler experience with even more great food and drink options to kick off their journey.”

Of the $45 million project, over $17 million was raised through sponsorships, with the remainder of the support coming from airport funds and passenger facility charges. Sponsorships included an $8 million donation from Amway as the title sponsor of the Gateway Transformation Project. eSpring drinking fountains and other Amway branding is seen throughout the airport space.

“These sponsorships are a reflection of the level of commitment, pride, and passion so many have for our community,” said Bill Payne, Vice Chairman of Amway, Chairman of the Regional Air Alliance, and Gateway Transformation Campaign Cabinet Member. “Having a modern, world-class airport is critical to West Michigan’s economic vitality, and this will be the reason West Michigan continues to attract more business, more jobs, and more people for generations to come.”

A reconstructed indoor observation area on the mezzanine of the Grand Hall where passengers may see friends and loved ones depart for their flight is also a part of the newly designed space.

The airport is working with the Gerald R. Ford Presidential Foundation to incorporate an exhibit dedicated to the 38th President, which will be pre-security as a part of the new Grand Hall design. The exhibit will include photos, an aircraft carrier model, displays, and rotating historical pieces from the Gerald R. Ford Museum, and is slated to open with a celebration and ribbon-cutting on October 17.

Construction spanned 21 months, is estimated to have utilized 223,200 man hours, and expanded the Airport building by over 59,000 square feet.

A second phase, which will include improvements to the airline ticketing, baggage screening, and baggage claim areas, is currently in the design phase. Construction is slated to begin in 2018. The total cost of the entire project will be $45 million.