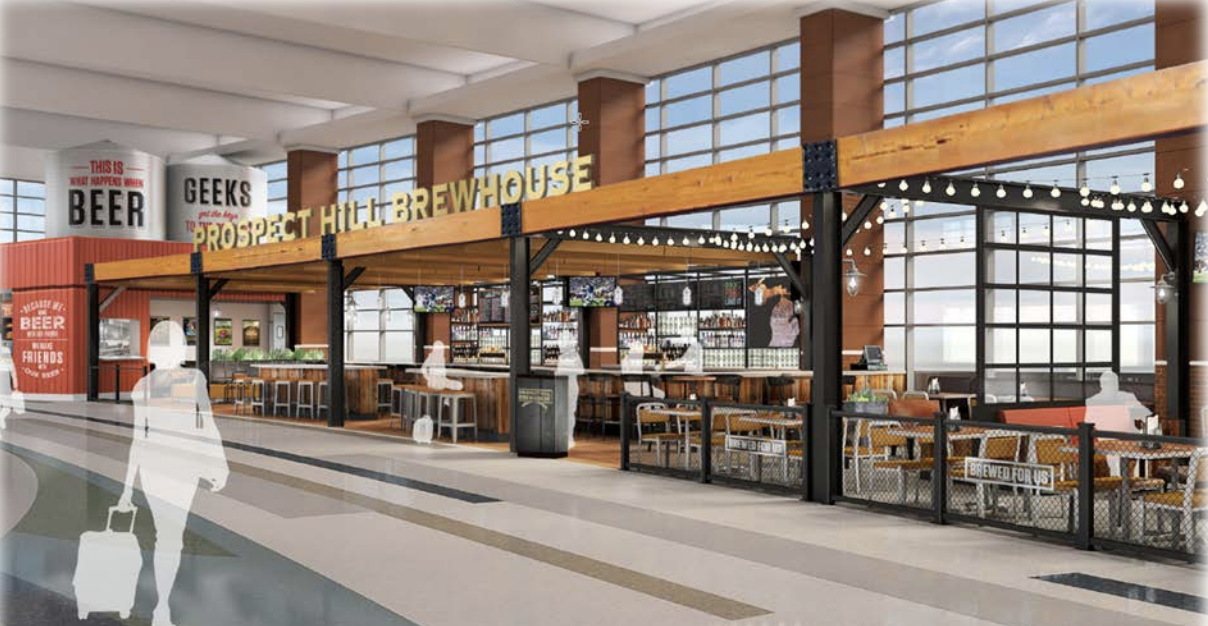 GRAND RAPIDS, Mich. – In a city that holds the title Beer City, U.S.A; it is only appropriate that new construction at the Gerald R. Ford International Airport (GFIA) include a restaurant featuring beer from Grand Rapids’ largest brewery, along with other new restaurant and retail space.

Global restaurateur HMSHost, in partnership with the Gerald R. Ford International Airport, have signed an agreement that will put new restaurants front and center as a part of the airport’s Gateway Transformation Project. In addition, Hudson Group, the largest travel retailer in North America with over 950 stores in 83 airports, will be opening a marketplace with Michigan-themed retail offerings post-security.

Prospect Hill Brewhouse will be located post-security in the newly expanded area of the airport. The restaurant will feature a selection of beverages including Founders beer, and a menu of handcrafted deli sandwiches like the Buffalo-style roasted chicken, bacon and tomato conglomeration served on a French roll; a cheesesteak featuring provolone cheese and roasted peppers; and a pulled pork sandwich with, Colby jack cheese, and Dirty Bastard BBQ sauce on a toasted ciabatta.

“Our passengers were craving more options for food and beverage post-security, and this partnership with HMSHost will accomplish just that,” said Gerald R. Ford International Airport Acting President & CEO Phil Johnson. “We are excited to have a local flair in our restaurant scene, and what better way to own up to our title of Beer City, U.S.A. than adding the Prospect Hill Brewhouse right here in the airport?”

In addition to the Brewhouse, HMSHost will open two new Starbucks – one pre-security and one post-security, a restaurant called The Local @ GRR on Concourse A, as well as another casual dining restaurant on Concourse B. A Burger Federation restaurant along with a Firehouse Subs is also in the works at GFIA.

“We are thrilled to have the opportunity to continue partnering with Gerald R. Ford International Airport. It is very exciting for HMSHost to be able to contribute to the many great enhancements happening at the airport,” said HMSHost Vice President of Business Development Bryan Loden. “The restaurants we will be opening will deliver an authentic taste of Michigan and will offer the variety and quality that travelers demand.”

Prospect Hill Brewhouse is set to open in summer 2017, with the other HMSHost offerings opening soon after.

Retail space in the new Gateway Transformation Project includes a Touch of Grand Rapids store featuring West Michigan themed products and in partnership with the Grand Rapids Art Museum. Additionally, Grand Rapids Magazine Travel Stores will be located on each concourse, and a Hudson News retail store will be located pre-security in the grand hall. These stores will offer travel essentials ranging from reading materials, snacks, and beverages to travel and convenience necessities, tasteful local souvenirs, and electronics.

As 'The Traveler's Best Friend,' our goal was to create a more open, friendly and welcoming environment for travelers with the newly designed store at Gerald R. Ford International Airport to give the West Michigan community a sense of place," said Hudson Group Senior Vice President of Operations Mario Scorcia. "Hudson is the #1 travel retail concept in some of the busiest airports across North America – and now around the world. It is a true game-changer in the travel retail industry and we could not be more excited to bring our global expertise to Grand Rapids.

Global restaurateur HMSHost is a world leader in creating dining for travel venues. HMSHost operates in more than 120 airports around the globe, including 44 of the 50 busiest airports in North America. The Company has annual sales in excess of $2.8 billion and employs more than 37,000 sales associates worldwide. HMSHost is a part of Autogrill Group, the world’s leading provider of food & beverage services for people on the move. With sales of around €4.3 billion in 2015, the Group operates in 31 countries and employs over 57,000 people. It manages approximately 4,200 stores in over 1,000 locations worldwide. Visit www.HMSHost.com for more information. We can also be found on Facebook at fb.com/HMSHost and on Twitter at @HMSHost.

Hudson Group, the largest travel retailer in North America, is a wholly-owned subsidiary of international travel retailer Dufry AG (DUFN) of Basel, Switzerland. Hudson Group operates over 950 Hudson, Hudson News, Hudson Booksellers, cafes, specialty retail and duty free shops in 83 airports and transportation terminals in the United States and Canada, and operates in 24 of the top 25 airports nationally. Dufry operates over 2,200 stores in more than 60 countries and 370 locations, including airports and transportation terminals around the world.