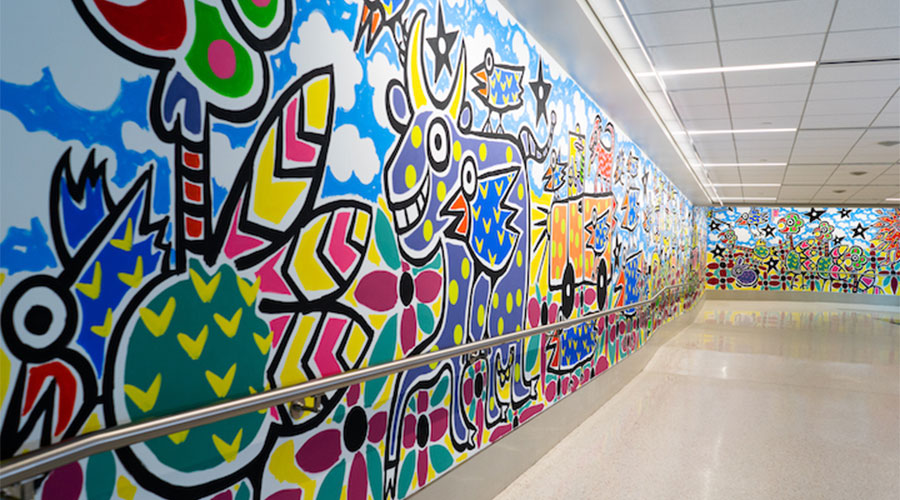 “Chickens Don’t Fly Too Much” is a bright, whimsical and action-packed mural that is vintage Roberts: bold colors, stylized characters and repeating patterns. Chickens, bluebirds and other birds join trucks, dogs and Roberts’ signature sun to create a vibrant mural that welcomes or bids farewell to travelers on the ramp after the security checkpoint that leads up to Concourse A.

The theme was perfect for the Airport, according to the artist, who said “it feels like everyone is going somewhere, even the clouds.” The installation took eight days from sketching to finishing touches and was made possible by a generous grant from the Frey Foundation as part of the Airport’s $52.3 million Gateway Transformation project, which is expected to wrap up in the coming weeks.

“Chickens” is the second in a series of murals created by notable West Michigan artists as part of the Frey Foundation’s gift, which will also feature changing sculptures and exhibits. The mural joins “The Great Blue,” which was completed in March by Nick Nortier and Kyle DeGroff and features a blue heron on a Michigan waterway.

“I am deeply honored to have been selected for this opportunity,” Roberts said. “For the past decade, it’s been a dream of mine to have work displayed at Ford Airport, and I appreciate the Frey Foundation’s commitment to public art through its continued support of West Michigan artists.

“West Michigan wants to be a destination for art, and the Airport is the gateway to our community. To have a venue to do artwork for people who are coming and going from around the globe is really an open window for an artist.”

Originally from New Orleans, Roberts has called Grand Rapids home for the past 48 years. A selftaught artist, his paintings and sculptures are found in galleries, private collections and public spaces. For 18 years, he and his wife, Carmella Loftis, ran Sanctuary Folk Art in the Heartside district of downtown Grand Rapids, selling his works and those of the men and women experiencing homelessness in the community. The husband-and-wife duo have collaborated on dozens of community art endeavors.

“As the Gateway Transformation project prepares to wrap up, the addition of public art seems the perfect way to celebrate its successful conclusion,” said Holly Johnson, president of the Frey Foundation. “We are honored to support the work of Reb Roberts, whose mural speaks to the true nature of travel and the Airport’s ability to make connections beyond West Michigan.

“Public art enables us to share what makes our community distinctive and recognizable with the rest of the world. We are delighted to be able to showcase talented artists like Reb Roberts and share his work with all who visit the Airport.”

For “Chickens Don’t Fly Too Much,” Roberts sketched a concept of the mural for the Airport’s Art Committee, which was formed in collaboration with Airport staff as well as local art visionaries Miranda Krajniak, executive director of the Urban Institute for Contemporary Arts, and Henry Matthews, distinguished university associate, Galleries and Collection at Grand Valley State University. After Roberts was selected for the project, he transferred the sketch to the wall, which was “bigger than I imagined,” he admits. He painted for six hours a day for eight consecutive days, hearing a lot of “thank yous” from passengers and Airport teams who stopped to admire his work.

“This was a perfect time to be able to create something that is fun and colorful and wild, for a lot of reasons,” said Roberts, who mixes all his own paints by hand. “Like everyone else, I’d been laying low during the lockdown. A lot of things scheduled for spring were delayed or canceled because everyone was being careful.

“When it came time to bust out, this was the perfect opportunity. Here’s a giant space and a place to do what I love to do: create artwork. It feels like I’m getting some freedom in a place that I really wanted to land. It’s an honor.”

The $52.3 million Gateway Transformation project kicked off in 2015 with multiple phases of improvements, including upgrades to airline ticket counters and baggage service offices, baggage claim, curbside and other “front of the house” areas. The Airport added 59,000 square feet of space, relocated TSA screening equipment, added Prospect Hill as a new restaurant and full-service bar, upgraded lighting, enhanced signage and more remodeling projects. In addition to state and federal grants, the project received more than $17 million of contributions from local businesses that value the Airport.

“We are grateful for the generosity of the Frey Foundation and the gift of this incredible public artwork, which truly puts the finishing touches on our Gateway Transformation,” said Ford Airport President and CEO Tory Richardson. “We have received many wonderful comments from guests, visitors and team members alike, who appreciate being able to connect with original works of art from West Michigan artists. We truly appreciate our partnership with these artists and with the Frey Foundation.