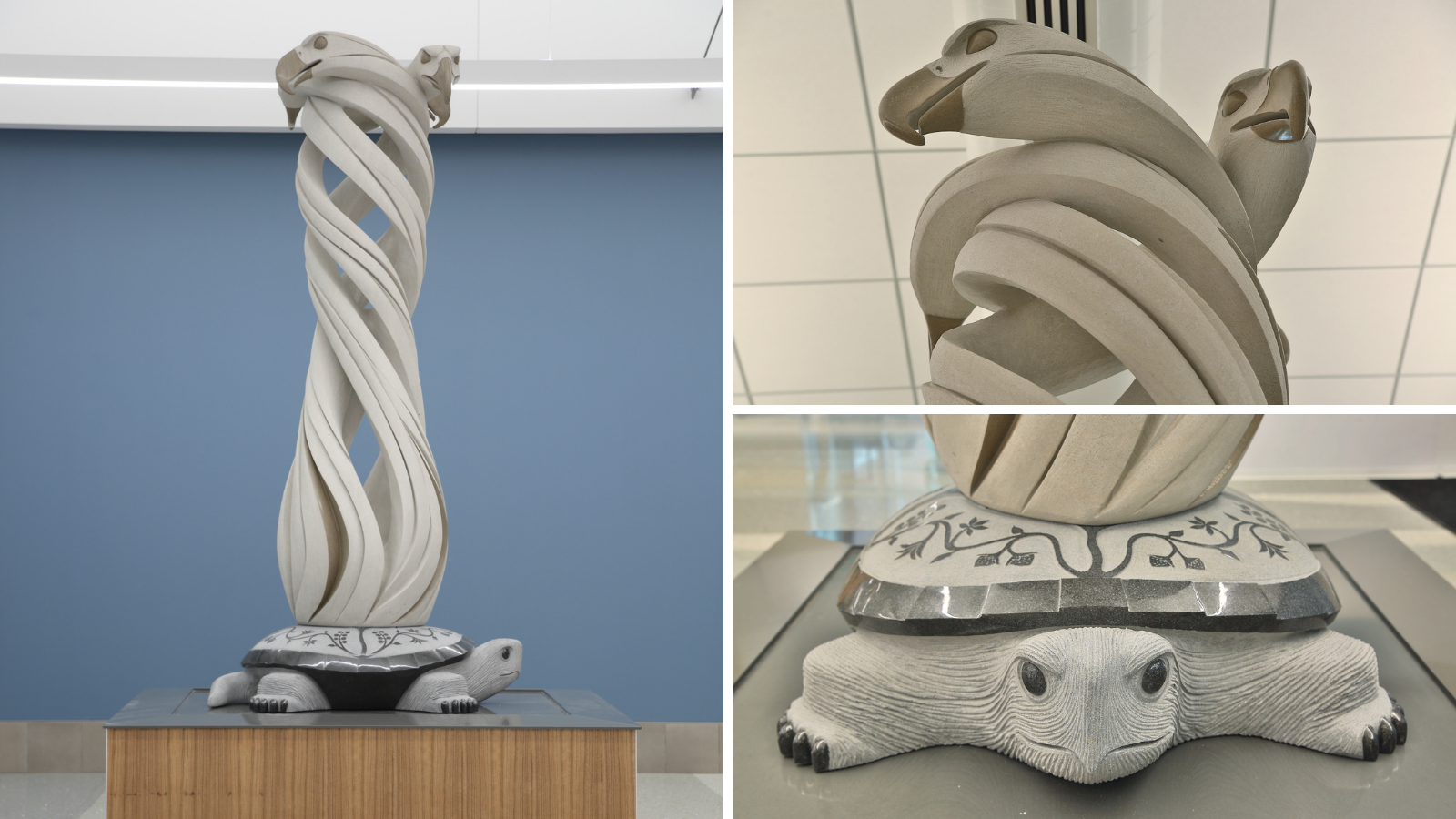 “Aankobiisinging Eshki-kakamigak,” or “Connection to Creation,” is carved from black granite and Indiana limestone and features important elements in Anishinaabe teachings. The base features a turtle with Anishinaabe floral design representing the four cardinal directions – north, or giwaydoonig, east, or wabunnoong, south, or zhawanoog, and west, or ningabeunoong. On top of the turtle’s shell sits a second feature of fire and flames flowing upward in a spiral pattern suggesting smoke. The pinnacle features four eagles with their mouths slightly open.

“One of my purposes in life as an Anishinaabe man and sculptor is to honor my ancestors,” Quigno said. “My intention is to share a portion of the Anishinaabek’s beautiful history, our stories and rich traditions in stone.”

Quigno further went on to explain each of the sculpture’s elements and their significance in Anishinaabe culture.

“The turtle, or mizkeekay, and its shell represent the land we inhabit. She is the base the fire and flames sit upon,” he said. “Fire, or ishkoday, is important to the Anishinaabek – through the fire and smoke, our prayers flow up to the creator. Finally, the four eagles, or migiizis, represent and acknowledge the four cardinal directions. The eagles are said to carry those prayers to the creator.”

A year ago, the Airport’s art committee approached Quigno to commission a monumental sculpture of stone. Placed near the baggage claim area, and adjacent to the future federal inspection station, the sculpture serves as a beacon for visitors to understand the rich native culture that has been in the area for thousands of years.

“As the gateway of West Michigan, the Ford Airport is in a unique position to share the culture of our community to visitors,” said Tory Richardson, president and CEO of the Gerald R. Ford International Airport Authority. “We are so pleased to welcome Jason’s incredible sculpture in our collection as a reminder of the important history of Native Americans in our community.”

Born in Alma, Michigan, Quigno was inspired at a young age by the work of his artist uncle, eventually going on to apprenticing under Daniel Mena. He has exhibited his work across the U.S. and can be seen locally at the Grand Rapids Public Museum, Grand Valley State University, the Muskegon Museum of Art, in downtown Holland and in numerous private collections, among other places. Quiqno works in all types of stone, deliberately choosing simple designs to captivate the viewer with a sense of graceful movement.

Quigno says this piece is a point of pride for Native Americans in the community.

“I made this for the Airport and its visitors, but also for my Anishanabe people, for them to feel proud,” Quigno explained. “One of their own is making a monument to honor them.”

Installation took place on April 22, which was Earth Day. The installation was originally scheduled for November to coincide with Native American History Month, but was postponed due to COVID-19 restrictions.

Quigno joins other local artists in creating works for the Ford Airport. This past fall, the Airport unveiled a statue of its namesake by J. Brett Grill and a new Presidential Gateway Plaza to welcome visitors. Additionally, as part of the Gateway Transformation project, two new murals, including “Chickens Don’t Fly Much” by Reb Roberts and “The Great Blue” by Nick Nortier and Kyle DeGroff, were commissioned.

The Gerald R. Ford International Airport is the second busiest airport in Michigan, serving business and leisure travelers with nonstop and connecting flights on six airlines. The Ford Airport is managed and operated by the Gerald R. Ford International Airport Authority. For more information, visit www.flyford.org or follow the airport on Facebook, Twitter and Instagram @FlyGRFord.