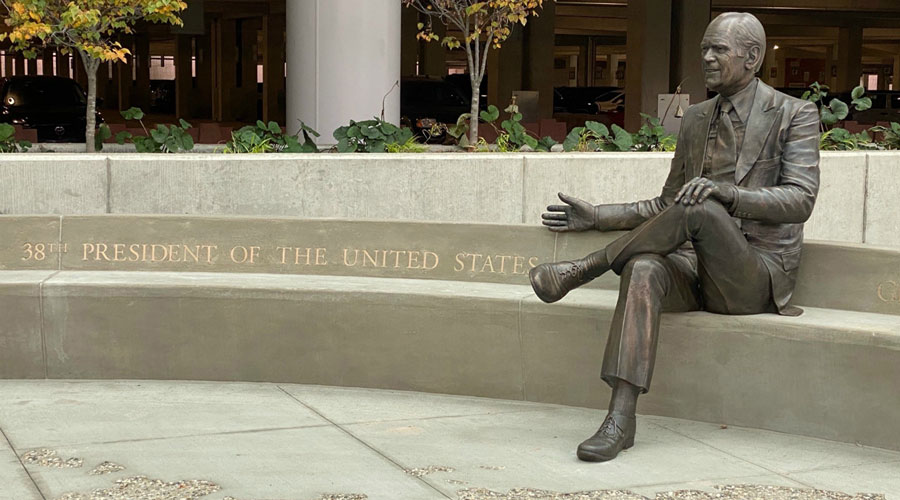 Grand Rapids, Michigan, October 15, 2020 – The Gerald R. Ford International Airport today unveiled a statue of its namesake Pres. Ford as part of the Grand Rapids Community Legends Project to honor the individuals who shaped the culture of and helped build West Michigan. The Ford Airport also dedicated a new Presidential Gateway Plaza, which will serve as home to the statue and provide a warm welcome to travelers from all over the world.

Mike Ford, eldest son of the late Pres. and Betty Ford, delivered video comments to the assembled crowd during this morning’s dedication under the Grand Canopy facing the Ford Airport terminal. The unveiling of the statue was led by the family of Ambassador Peter and Joan Secchia, who have funded the Community Legends Project to recognize influential figures throughout the history of Grand Rapids and inspire others with their stories.

The statue of Pres. Ford is the Secchia’s gift to the Airport and all those who travel through it. The Gerald R. Ford International Airport Authority designed and funded the development of the Presidential Gateway Plaza. Board Chair Dan Koorndyk, CEO Tory Richardson and other members of the board and leadership team joined elected and community leaders from the region and members of the Gerald R. Ford Presidential Foundation Board to dedicate the plaza.

“This statue holds a special place in our family members’ hearts,” said Community Legends Committee Chair Charlie Secchia. “Not only was Pres. Ford an adept and insightful leader in a tumultuous time, he was Grand Rapids’ favorite son and someone my parents are honored to have called a friend. We could not be prouder to call him our own and to dedicate this memorial as part of the Community Legends Project.”

Pres. Ford’s bronze statue is in a seated position, one arm lifted for embrace. A curved sandstoneinspired seating element complements the statue, creating a place for visitors to sit with Pres. Ford while overlooking a global map etched into the concrete. The American and Michigan flags rise from West Michigan as a tribute to Pres. Ford's love for and commitment to his country and home state.

“The Airport Authority has for many years had wonderful ways to celebrate and honor our parents’ legacy through special projects,” said Mike Ford in a video message shared during the unveiling. “Several of those have been championed and led by our dear friends, Ambassador Peter and Joan Secchia. We thank you for your wonderful friendship and for the ways in which you have kept my parents’ memories and legacies alive and strong right there in their home of Grand Rapids.

“Grand Rapids was a special place of love and devotion for my dad. The statue is an honor he would be humbled by. As a congressman, he passed through the airport thousands of times. The many visitors who come through the Airport will now get to experience their favorite son, Jerry Ford.”

The statue of Pres. Ford – the 12th in the Community Legends series – is across town from the one of his beloved wife, Elizabeth Anne “Betty” Bloomer Ford, who was also memorialized in bronze by the Community Legends Project. Her statue was the 10th in the series and was dedicated in 2018 at the Gerald R. Ford Presidential Museum in downtown Grand Rapids. Additional legends in the series include U.S Sen. Lucius Lyon, Chief Noahquageshik, Lyman Parks, Anna Sutherland Bissell and Jay Van Andel.

“Gerald R. Ford was an international man, well-traveled around the globe who always carried with him immense local pride for his Grand Rapids home,” said Ford Airport Authority Board Chair Dan Koorndyk. “We envisioned this new memorial as a way to share his global vision while offering an approachable space for our community to engage with and to enjoy.

“We so appreciate the Secchia family for choosing the Ford Airport to be home to this incredible piece of art. We hope the new Ford statute and Presidential Gateway Plaza will become a famous and well-recognized icon for our region.”

J. Brett Grill, the artist for the Ford statue, began working on the project in the summer of 2019. He began by spending months researching the life and writings of the 38th president of the United States in order to crystallize all the vital aspects of Pres. Ford in one static moment, using movement of the body, folds in the clothing and intricacy of expression to convey his warmth, integrity and humanity.

“This sculpture stands in contrast to many of the existing monuments honoring presidents, which are typically posed and elevated,” Grill explained. “Although Pres. Ford was certainly ambitious, he was, by all accounts, an everyman, humble and unassuming, not your typical politician.

“To reflect that, the sculpture sits comfortably, welcoming travelers to have a seat next to the leader of the free world. He is approachable, amiable, and honest: the quintessential family man. It is fitting this sculpture is placed at the Ford Airport in his hometown. Even when he lived elsewhere, he remained our neighbor.”

Gerald Ford was a member of Congress for 25 years where his reputation for integrity earned him the position of House Minority Leader from 1965 to 1973. He was appointed vice president by Richard M. Nixon in December 1973 and, following Pres. Nixon’s resignation in 1974, became president of the United States. During his presidency, Pres. Ford took action to stem inflation, pass the Freedom of Information Act and resolve unrest in the Middle East. He was an outspoken supporter of the Equal Rights Amendment. In 1999, he was awarded the Presidential Medal of Freedom in honor of his public service in healing the nation after the turmoil of Watergate.

“We are honored to be the new home of the latest sculpture in the Community Legends Project,” said Ford Airport Authority President and CEO Tory Richardson. “We appreciate the generosity of Ambassador and Mrs. Secchia and their family in commissioning and donating this important work of art to our community.

“The statue and plaza will welcome West Michigan residents, travelers and visitors for generations to come, reminding us all of the tremendous statesman and community advocate we had in Pres. Ford.”

About the Community Legends Project

J. Brett Grill is a nationally recognized artist whose works include sculptures of President Gerald R. Ford in the Rotunda of the U.S. Capitol in Washington D.C. and on the grounds of the Gerald R. Ford Presidential Museum. Mr. Grill also created the bust of Betty Ford on display at the Betty Ford Center in Rancho Mirage, California and a sculpture of the former first lady at the Ford Presidential Museum.