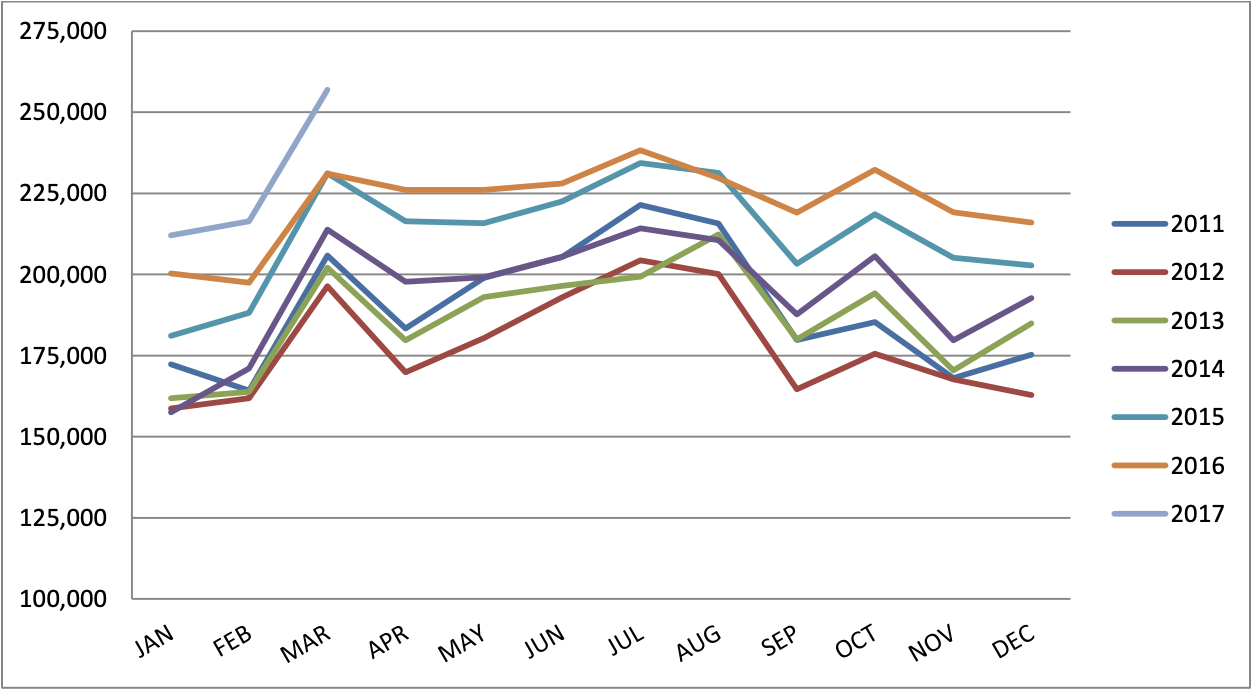 March passenger numbers were up 11.17 percent year-over-year; resulting in the busiest March ever, the busiest first quarter ever, and breaking an all-time monthly record from July 2016.

Each month of 2017 has resulted in record-breaking passenger numbers, also equating to GFIA recording its busiest first quarter in history. Through March 2017, GFIA has served 685,278 passengers- up by almost 9 percent from 2016.

“Our airline partners have told us that we’re a successful market for their product, but having record-breaking stats like this only put a star next to our name for those airline partners to keep growing,” said Gill. “We hope our continued growth prompts more nonstop service, and more options for those travelers who keep supporting us to achieve these record-breaking stats.”

GFIA recorded a stellar February, serving over 200,000 passengers in the month for the first time ever, and tallying enplanements that shot over 10 percent for the month. The record-breaking 2017 is coming off the heels of a 2016 that saw a passenger record 2,650,630 passengers in and out of GFIA – an increase of 4.06 percent from 2015.

“As we continue to grow in traffic it is imperative that our facilities keep up with our passenger demand,” said Gill. “We will continue to do our part to improve our amenities, technology, customer service and infrastructure. We are excited to see what the future holds, and we only expect more growth in the years to come.”

Gateway Transformation Project construction began in December 2015 and is slated to continue through summer 2017. The project’s main feature is the consolidated passenger security checkpoint which will centralize and combine security screening to one main checkpoint in the Airport, eliminating separate screening for passengers traveling through either Concourse A or B. Construction also includes new terrazzo flooring, lighting fixtures, restroom & nursing room, family restrooms, pre and post security business centers, new retail and food & beverage space, and much more.

GFIA monthly passenger statistics are available on our website here.