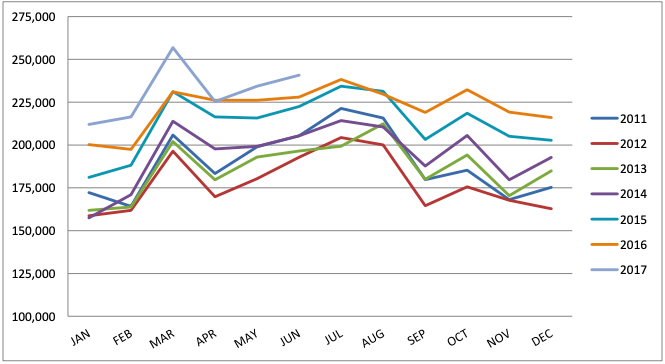 Grand Rapids, Mich. – June 2017 was the busiest June on record at the Gerald R. Ford International (GFIA) Airport, coming off a March that was the single busiest month in airport history.

June 2017 passengers were up 5.59 percent year-over-year, not only resulting in the busiest June ever, but also securing the title of busiest second quarter in airport history by over 30,000 passengers; and the busiest overall quarter ever serving over 700,452 passengers since the beginning of the year.

“We are halfway through 2017 and already seeing incredible record-breaking statistics,” said GFIA President & CEO Jim Gill. “This is a testament to our region, and our growing community along with our airline partnerships. Not only does this June go down in airport history, but 2017 now holds the title for busiest first half ever beating out 2016 by over 86,000 passengers.”

Each month of 2017 has resulted in record-breaking passenger numbers, and the Airport has seen ten straight months of record growth.

“The first phase of our Gateway Transformation Project will be complete at the end of summer, and we’re excited to see what the combination of this redesign along with the growing business in West Michigan does for our numbers,” said Gill. “We hope our continued growth prompts more nonstop service, and more options for those travelers who keep supporting us to achieve these record breaking stats.”

GFIA monthly passenger statistics are available on our website: http://www.grr.org/history.php