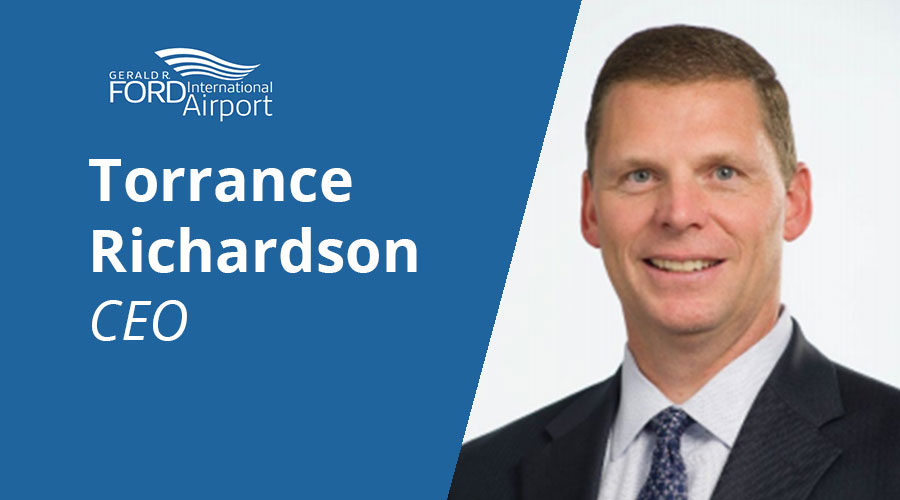 In his new role, Richardson will be responsible for planning, organizing, directing and controlling all functions and activities of the airport system operated by the Authority at Michigan’s second busiest airport. Working with a team of approximately 110, Richardson will develop and implement a strategic vision for GRR, including long-term plans for future development, infrastructure improvement, passenger growth and other initiatives.

“We are delighted to welcome Tory as the new President and CEO of the Ford Airport,” said Board Chairman Dan Koorndyk. “He brings a tremendous depth and breadth of aviation leadership and management from his tenure at airports throughout the Midwest to our team in Grand Rapids.

“We evaluated a number of exceptionally strong candidates from around the country for this position. The Airport Authority Board particularly valued Tory’s passion for aviation, his demonstrated expertise in business development and financial management, and his strong focus on both customer service and talent development.

“Tory has led numerous functions, from HR and operations to government affairs and strategy, and has a proven track record of successfully guiding organizations through significant change. He’s joining the Ford Airport at an exciting time in our history, and we look forward to welcoming him to West Michigan.”

“I’m honored to join the professional team at Ford Airport,” Richardson said. “Together, we’ll focus on creating even stronger partnerships between the Airport and the community so we fully leverage economic and development opportunities during this exciting time of growth.”

He has also held leadership positions with the Airports Council International-North America and is also the past president of the Ohio Aviation Association. Richardson holds a Bachelor of Science degree in aviation management from the University of Dubuque.

Richardson and his wife, Lisa, have three teenagers: Zach, Logan and Kyra.