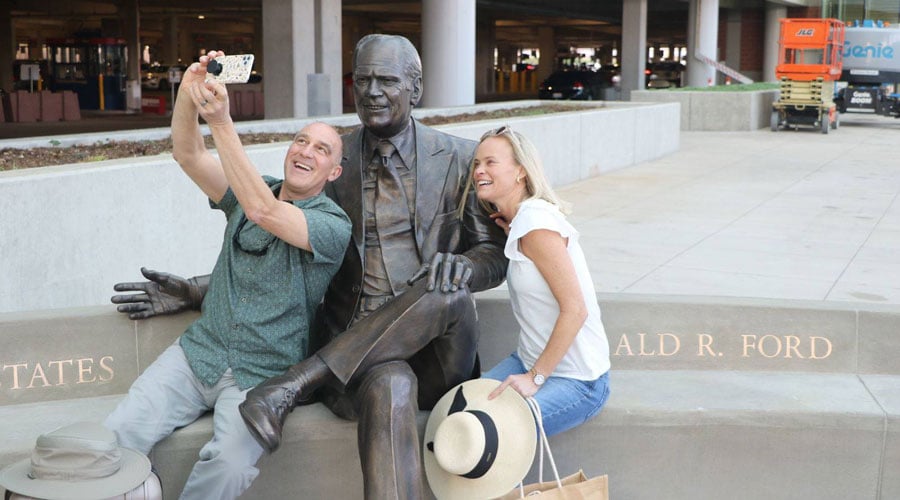 Grand Rapids, Michigan, November 23, 2020 – The newly unveiled statue of President Ford at Gerald R. Ford International Airport has become a quick hit with local visitors and travelers from around the world. To help these fans share their special moment with the Ford statue, the Airport has launched a social media campaign featuring the hashtag #JerryandMe.

The campaign encourages visitors to the Ford Airport to take a selfie with the statute and post it on Twitter, Facebook or Instagram using the hashtag #JerryandMe from today through December 31. The initiative also features prizes, with a randomly selected photo from each social media platform earning the creator a goodie bag from the airport.

The bronze statue is in a seated position, one arm lifted for embrace. A curved sandstone-inspired seating element complements the statue, creating a place for visitors to sit with President Ford while overlooking a global map etched into the concrete.

“We are pleased President Ford’s statue has been embraced by community members and travelers alike,” said Tory Richardson, Ford Airport Authority President and CEO. “The statue is inviting to all ages and is meant to encourage visitors to pause and pay tribute to the tremendous statesman and community advocate we had in President Ford.

“We hope this selfie campaign helps capture these special moments and helps build on our sense of community within and well beyond West Michigan.”

The statue was unveiled last month as part of the Grand Rapids Community Legends Project to honor the individuals who shaped the culture of and helped build West Michigan. The statue is the centerpiece of the newly dedicated Presidential Gateway Plaza, which provides a warm welcome to travelers from all over the world.

The late U.S. Ambassador Peter and Joan Secchia funded the Community Legends Project to recognize influential figures throughout the history of Grand Rapids and inspire others with their stories. The statue of President Ford is the Secchias’ gift to the Airport and all those who travel through it. The Gerald R. Ford International Airport Authority designed and funded the development of the Presidential Gateway Plaza.

During the unveiling ceremony, Community Legends Committee Chair Charlie Secchia said this about the statue: “It holds a special place in our family members’ hearts. Not only was President Ford an adept and insightful leader in a tumultuous time, he was Grand Rapids’ favorite son and someone my parents are honored to have called a friend. We could not be prouder to call him our own and to dedicate this memorial as part of the Community Legends Project.”

Gerald Ford was a member of Congress for 25 years, where his reputation for integrity earned him the position of House Minority Leader from 1965 to 1973. He was appointed vice president by Richard M. Nixon in December 1973 and, following Pres. Nixon’s resignation in 1974, became the 38th president of the United States. During his presidency, he took action to stem inflation, pass the Freedom of Information Act and resolve unrest in the Middle East. He was an outspoken supporter of the Equal Rights Amendment. In 1999, he was awarded the Presidential Medal of Freedom in honor of his public service in healing the nation after the turmoil of Watergate.